Classic game you pick up again and again?

Recently I've been playing Chrono Trigger again for...I don't even know how many times this makes. It's one game that I see to come back to every now and again. There really isn't any other game that I do this with either. For some reason I just love this game. Do you all have a game that grabs your attention like this?

For me its the old school adventure games (Maniac Mansion, Day of the Tentacle, The Dig, Loom, Monkey Island 1 & 2, Kings Quest, Space Quest, Police Quest, Indiana Jones, Zak McKraken and the Alien Mindbenders etc.). Basically any of the old school Sierra or LucasArts Adventures. I grew up playing them and have gone back and played all of them MANY times. They just never get old. Some of the more modern games that I can play time and time again include the Baldur's Gate series, the Icewind Dale series, Warcraft III, Diablo II, etc. I go back and play Warcraft III every year or two. In fact, its actually about that time as I haven't played it in awhile. It just never gets old.

Whats really sad is that many gamers today have gotten so hooked on achievements and trophies that they no longer play any of the older games. If there aren't achievements or points to be had, they simply wont play it. One of my good friends is like this and an article was posted recently on Raptr that talked about addiction to achievements and many of the people that responded in the comments section openly admitted that they no longer play games that don't have achievements. Personally, I think its pretty sad as those people are no longer gaming for the sake of playing and enjoying the game, they are gaming for the sake of getting a higher gamerscore. For people like that, gaming has become synonymous with achievement hunting. They would rather play a Hannah Montana game and get an easy 1000 points than go back and play a classic that didn't have achievements. I couldn't imagine not being able to go back and enjoy some of the older games from my past. In all honesty, I would estimate that roughly 15-20% of my time spent gaming is spent playing older games.

Don't get me wrong, I think achievements add an interesting component to games and I myself enjoy going after them from time to time, as long as they are interesting achievements that add to the quality of the game. That being said, achievements for me are always secondary to enjoying the game itself and I would never let achievements dictate wether or not I will play a particular game.

I'd throw in GTA SA too

Yup, just picked up Namco Museum Battle Collection for the PSP, just for the arranged games that are supposedly different from the Namco Museum Virtual Arcade on 360.

Super Nintendo - Secret of Mana (the opening song makes me tear up a little), honorable mention to Earthbound and Crono Trigger

Sega Genesis - Shining Force II - In fact any of the shining series including Landstalker, also Warsong, aka Langrisser. Honorable mention to Streets of Rage 2 and Toe Jam and Earl, Hula Girls!

Dreamcast - Chu Chu Rocket - I know, all those amazing games and I can't stop playing this

I really need to replay FF VI as that is one of my favorites but I never do for some reason.

Dreamcast - Chu Chu Rocket - I know, all those amazing games and I can't stop playing this

Nothing wrong with that; Chu Chu Rocket is great in its own way 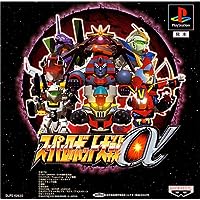 I guess since it came out 13 years ago it's a classic. Super Robot Wars Alpha is one of the best Playstation games I've ever played. Like how Pokemon Gold and Silver was the pinnacle of the Pocket Monsters franchise, this is the best Super Robot Wars game worth playing. It has a crap load of secrets that every time you start a new game, you're gonna want to get a different unit.  I've been playing it so much that I just got the Gundam F90.

It's a must play if you're a robot anime fan, and you don't really need to know much Japanese to play it. Just go to this site, and it'll teach you to get into the groove of the series.  The sequel Alpha Gaiden was fan-translated into English, but it's a much tougher game.

This, so much this. Running as Deion, Bo, or Barry diagonally through defenders never gets old

Pretty much any other Metroid game

The Legend of Zelda

I think the subject was 'game' not 'games'. No matter.

Does anyone else prefer older games?  My go to system is still the SNES.  I had a friend over last night and we beat Final Fight 3 and played Mario Kart battle.  I've got NCAA 14 unopened and beat Far Cry 3 recently, but I play older games more than I do new ones.

I think the subject was 'game' not 'games'. No matter.

It's hard to pick just 1. I can grab anything I listed as be equally satisfied.

I got another one to add.

I play through Chrono Cross every couple of years.

I also try playing through Chrono Trigger every couple of years, but, as great as the game is in other areas, the battle system is way too simple/bland to hold my attention all game long.  So I've only ever managed to complete the entire game once so far, despite all the time I've spent playing it over the years.

I think Super Mario Bros. 3 is the game I can pick up often and still enjoy quite a bit. Same goes for Super Mario World on the SNES. I can never tire of these games.

There are a lot more, but those two are the big ones for me.