If you can't slam with the best (aka RPG Thread XVIII), then jam with the rest!

In the latest installment of the exciting RPG Thread SaGa: 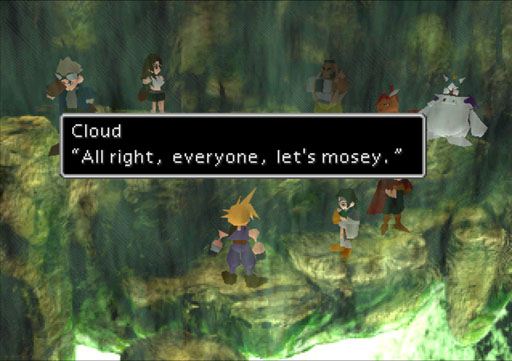 And much, much more! So the usual, in other words.

I don't really have anything else to add right now, other than:
- I hope to wrap up Tales of the Abyss soon
- I probably won't wrap up Harvest Moon: A Wonderful Life anytime soon
- A-couple-days-old news, but Shin Megami Tensei IV is $50, holy shit O_O; There better be some really sweet bonus items...

Shut Up and Jam Gaiden 2 is gonna be so good.

I see what you're doing. Stop trying to turn this into a 3DS thread.

Don't be hatin' just cause the 3DS is where it's at.

At least, until Xillia.

Tje 3DS is just sooo good though. Monster Hunter 3 Ultimate on the road, then transfer save back to WiiU when I'm back.

Really liked the demo of Etrian Odyssey 4. Always assumed I'd hate a dungeon crawler but something in that demo just clicked, so now I have to keep an eye out for a sale...

I really need to get a 3DS. Some awesome rpg's coming. The old DS kinda slacked off on the RPGs towards the end if its run, so I have gotten away from handheld RPGs.

I still have a pretty big DS backlog, and it's looking like my now-small 3DS one might be just as large within a few years. It never ends @_@

Speaking of 3DS, we might be getting Fantasy Life! Fingers crossed!

"Shera, seriously, we're about to launch the rocket..."

"Just give me a second."

I have hesitated playing Persona 2:EP because of the huge time sink I have heard about it being. Is it really that grindy or just long, and how does it compare in difficulty with other SMT games like Nocturn?

Watch me give them no money...

Because it went to that awesome GOG.com deal that is going on.

Oh, that is a lovely one. I wholeheartedly support people throwing money at GOG for that deal.

Real talk though, the Aeris scene was much cooler than I remembered. The Jenova fight to her theme song was on point. Ok, now it's getting confusing. So, at some point you exit that crystal globe lighthouse thing, and fall off the table into outer space?

... and then it goes into a nighttime version of the interior of the crystal ball, yes.

Anyway. The Kickstarter is over.

$4.189 million via Kickstarter. The PayPal total is unknown, but based on what it was earlier today, I'd guess somewhere around $135,000. Another $200,000 out of the pocketbooks of inXile's CEO Bryan Fargo and this crazy motherfucker. Estimated release date is early 2015.

But man, you know who's gotta be happy about this? Fuckin' Monte Cook, that's who. Dude used to be a major designer at TSR/WotC, did a shitload of Planescape and 3e stuff, left in defeat, and decided to make his own thing from the ground up. Not only did that turn out way better than he expected, but now Torment is basically a $4.5 million advertisement for his project.

They can take as much time as they need. Hell, I'll be fucking shocked if PE hits its April 2014 projection.

EDIT: But it's not too late to put a bit more money in!

No, but that doesn't stop western developers from creating games similar to some of the older games from Japan such as this (which is a mix of a few games):

Need an old school japanese RPG team to go make their own game.

I will continue to not give them any money for their kick starter fund.

Pretty much the only minigame worth playing anywhere ever.

The Jenova fight to her theme song was on point.

And before that, if you dodge her punch, have a comedy relief scene with Elena.

But you sure as hell cross-dressed!

I don't even remember this Elena Punch-Out scene.

You guys did a swell job at that.

Nah, no way I'mma be able to avoid the punch you just called out.

I didn't nail the Elena Punch Dodge until like the third time I played FFVII.

Here's what happens if you succeed (skip ahead to around 4:30):