Really loving these crewnecks. The LoZ was on sale for $20.

there is a loz wallet on clearance at gs for $7. looks kinda like the 1st shirt You must be looking at the standard edition. ;P

And yeah, the corner dings look terrible in picture for some reason.

I was actually cringing at that too at first when I purchased it, but when I got to take a look at it today, it's actually not that bad compared to how it looks on picture, which is weird, lol.

You must be looking at the standard edition. ;P

And yeah, the corner dings look terrible in picture for some reason.

I was actually cringing at that too at first when I purchased it, but when I got to take a look at it today, it's actually not that bad compared to how it looks on picture, which is weird, lol.

lol, guess you bought the last sold one, cause the corners look identical. 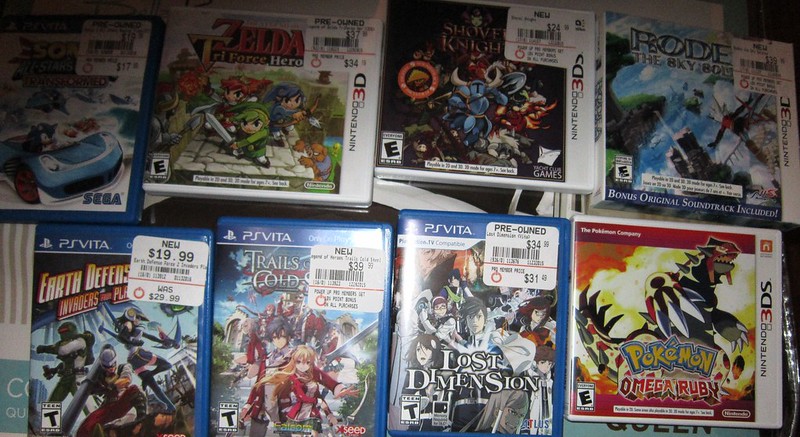 i did good for end of the month.

Why you no have GCU?

i do, i was just using my buy 2 get one free coupon that i have also gamestop is closer to my house then bestbuy. i did good for end of the month.

Is that earth defense force on the bottom left? Didnt know they made it for the vita. Is it like the 3 games in the series for xbox 360?

Is that earth defense force on the bottom left? Didnt know they made it for the vita. Is it like the 3 games in the series for xbox 360? Just a quick question for GameStop online orders, can the paid power up rewards membership discount be combined with the CAG16 discount?

got these games and anime for a dollar each these were five each xena is complete and harry potter is nib.

these were 25 for the both of them.

Rodea from Wal Mart Clearance (bought it before BB Clearance) and Halo for $1. I'm always down to buy Halo Novels on the cheap.

Got these for about $26. The Sega Game in the case is Phantasy Star Online 2. Not shown are two Graphic Novels (Revenge of the Green Goblin and Batman Knightfall Part 3) and Pokemon Ranger.

Promptly traded in Pokemon Ranger and WWE All Stars to GS.

Got all of this for $8 at my local Thrift Stores that aren't Goodwill. Wish there were more Scooby Doo stuff. Thankfully, the Thrift Store charges a flat $5 unless marked. They had it discounted at 60% off. CDs were 5 for $1

Only one above from December was Fatal Frame 4 Wii - imported it through PlayAsia.com, and it came this month (yay!) Since Nintendo refused to release FF5 on-disc, I spent that cash on FF4.  I am not a fan of digital games. Love this Fatal Frame title - which is done by the one and only Suda 51.

Picked up Nikita from Amazon UK (Maggie Q - so hot!).  Hitman (critics can say what they want, I enjoy this flick for what it is - a brainless action romp), Shaun the Sheep (such a charming film), MIB trilogy and the Martian from Target.  Season one of Shaun the Sheep, Rodea, and RE Revelations 2 from Best Buy, and Back to the Future from Walmart (had the buggy and ugly non-HD Wii game - skipped it; I love this re-released HD version).

got a lot of dollar games this weekend. everything in the first two pictures was a dollar each. i already had sly cooper  games but could not pass them up for a buck.

these are all  Japanese megadrive and game gear games. i have a game genie so i can play them on my sega genesis. they were $5 dollars each. the only problem with the games is that the back of the cartridge has a label like nes games have but it is over the screws so i can not open them without messing it up. also the game label goes over to the other half of the cartridge so it may rip if i open them. still worth it though i got phantasy star 2 and 3, strider, and three shining force games. i do have phantasy star II already so maybe one day I'll find the rest of the sega genesis versions

lucky collector, where are you getting all these games for a buck a piece? Got the Razer Firefly mousepad for my desk These gorgeous things for my Shield tablet

$16 from a local Thrift Store

I like Macross. I wish we got more Macross. Damn you Harmony Gold

Btw, the PS3 Game, Macross 30 is a wonderful game. And despite the language barrier, is easy to play

$16 from a local Thrift Store

Nice gamecube games. Got 2 copies of Gotcha Force, but sadly no case or booklet.

Thanks. Gotcha Force is a criminally underrated game. One of the best games on the Gamecube imo.

I had more Gamecube games but during the early 360 days, I foolishly sold a lot of them (Custom Robo, Fire Emblem

Also tagged with one or more of these keywords: pick-ups, CAG, stuff, bragging rights, show off, what a deal!