Probably only online.. just order for pickup if you're going to be there.

Items I want are only in store and cheaper in store. Meh, I'll just buy them now and not take the risk of them selling out.

Well, Sunday is 10% off gift cards so I'm planning to grab $50 for $45. They're also starting a $15 off $50 household essentials same day in case you need to stock up. Should be able to stack that deal on top of the coupon, so if you buy $60 worth of toilet paper for example, you can stack all of it for essentially half off. Just one idea.


Hoping to stack the 20% off with the B2G1 games deal tomorrow. Specifically, I ordered a few games from Target last week that were only available online, with the idea that if I timed their return correctly, they might end up back on the store shelf at cheaper reduced/online only prices, at which point I could pick them up again and use the 20% off coupon on top of that. Then, the B2G1 deal was announced and now that potentially sweetens the deal further if everything pans out and the deals stack. That said, I’ve decided to wait on doing the returns until later in the evening today, in hopes that they end up back on the miscellaneous games endcap tomorrow morning, at which point I can use both the B2G1 deal and the 20% off to pull the price as low as possible. If it works out, even if they go back on endcap at their retail prices, I might be able to get the price down from $95 to $52, which would put each game at a sub-$20 cost. Worst case scenario, I strike out completely, and try for the stacked promotion/discount online, if the B2G1 is in effect there. If it isn’t, it’s no biggie—I save money by not getting anything (which could be a win of itself, since I built quite the backlog with purchases already and have spent enough). Or perhaps the clearance bins show up at my store, like others have reported in other threads, and I score some older titles that have slipped my mind over time (Dark Souls Remastered, Hellblade, etc) for super cheap, along with scoring some household necessities, like Jodou mentioned above.

Ah, the life of a CAG...always chasing the thrill of the deal.


Not sure about The Outer Worlds question, but the B2G1 is supposed to be available tomorrow both online and in store (according to their weekly ad).

Not sure about The Outer Worlds question, but the B2G1 is supposed to be available tomorrow both online and in store (according to their weekly ad).


My understanding is that the B2G1 is a one day only event, as part of Target’s Cyber Monday specials this week (it’s mentioned in this week’s salepaper if you want to give it a look). The really interesting question is whether the 50% off select gaming deals are already active and remain so tomorrow (that deal is advertised in next week’s paper). From looking around on other threads here, it looks like others have already been getting games at the 50% off price in the past few days. If that’s true, tomorrow could yield even more lucrative deals on some of the cheaper/older games.

Here’s the screen grab from their ad this week (if it helps). 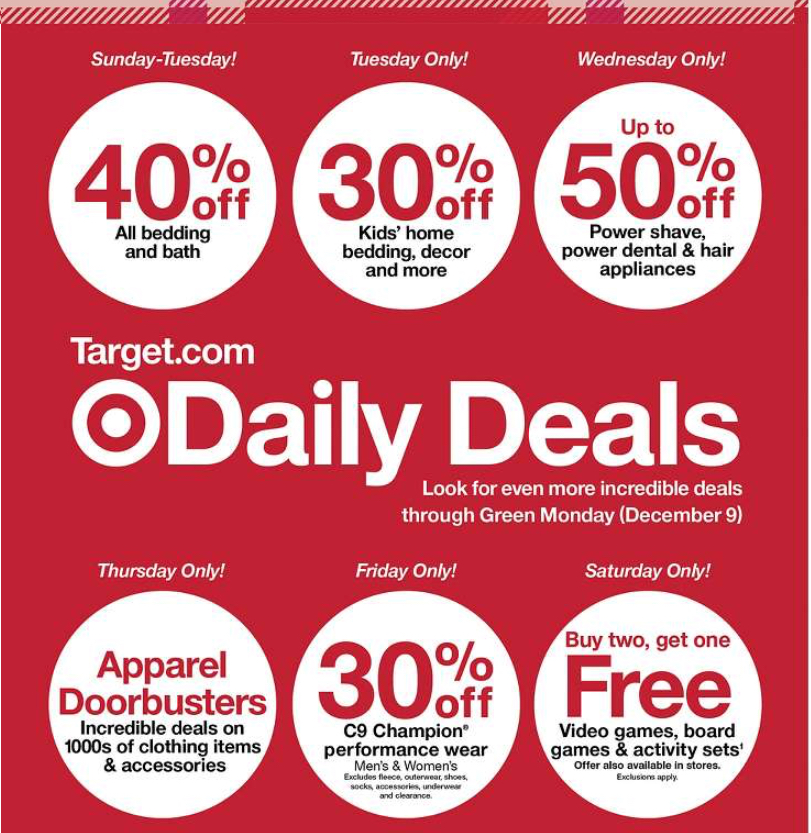 
Hm that’s interesting. 20% with red card and b2g1. Problem is more spending for me haha

Same guy who posted the 50% off of switch games on reddit. He post up all the switch games that can be use on the saturday deal.

Hm that’s interesting. 20% with red card and b2g1. Problem is more spending for me haha

Right there with you, bud. And obviously, given that the 20% off coupon is the most ‘valuable’ factor in the mix (due to its scarcity), you’d want to make the most of it, if it indeed stacks on top of the B2G1, so if there’s any grouping of more expensive games on your to-get list, it’s probably best to burn it there (along with any other non-gaming stuff that might be on your list). Just calculating off the top of my head, a B2G1 with three $60 games is around $120, and the 20% off would knock off another $24. Throw the purchase on a REDcard and that drops another $4.80 off. So if it all works out, it breaks down to around $30.xx per game. Provided there are no exclusions on recent games like Death Stranding, Star Wars, and something newer like Civilization 6 (referencing PS4 games here since that’s more my wheelhouse), this confluence of deals/stacks may be about the best pricing one could get on certain games this holiday season (fingers crossed on the exclusion list).

Of course, it would be nice if you could grab all the games you wanted at the cheaper price points too and use the 20% off with them, but given that the B2G1 always makes the cheapest game(s) free, doing so would undercut the maximum savings you could get. Of course, if you lucked out and had more than one coupon, then it’s less of an issue...

The 20% off coupon is not eligible for Switch games or any consoles.

Does anyone know if you can use the 20% off coupon once in store and once online?

Does anyone know if you can use the 20% off coupon once in store and once online?

Okay cause the email made it look like separate codes so I was wondering cause I’ll be making a shopping trip tomorrow and already used the online code. Thanks!

Guessing the B2G1 starts in just over an hour? Need a couple games as gifts that were never on sale for BF and gonna try the 20% coupon to see how that goes.

miyamotorola   I have mild to moderate eczema CAGiversary!   3813 Posts   Joined 7.9 Years Ago

It's not live yet? :/ I was having naughty adult dreams and now I hate life.

miyamotorola   I have mild to moderate eczema CAGiversary!   3813 Posts   Joined 7.9 Years Ago

These prices are horrific..

I used my coupon in store today, and the associate gave me the coupon back.  And no, it didn't work on the Switch games, so I had to purchase those in a separate transaction.  It worked on the PS4 and Xbox One games and the action figures that I bought.

Anyone know if the 20% off coupon would work on a Switch Pro controller. I’m not sure if it falls under “Hardware”.

Anyone know if the 20% off coupon would work on a Switch Pro controller. I’m not sure if it falls under “Hardware”.

I tried it online and it worked

I tried it online and it worked