Used earbuds from a random stranger. That just seems like something I would never want near my ear.

Thinking about it, that's nasty lol

How much do Apple earbuds sell by themselves?

Reading this thread has me motivated for yard sales.  This is the first time in like 5-6 years that I have Saturdays off!!!  Hopefully I'll be able to post some great finds.  I have another 2-3 weeks I'd say until the yard sale season starts, the snow is almost gone...lol.

Just so happened to have a Thursday sale right next to my house (I live in the middle of nowhere), that listed video games, it's like a real life unicorn.

Got Star Wars Battlefront 2 on the Xbox disc only for 1$.

Should add a nice chunk of change to the garage sale budget.

So I've finally got enough yard sales lined up to justify going out tomorrow, but I've got a "bird in the hand is worth two in the bush" situation. There's someone up the street from me that confirmed they have some games (no more details than that) and then a community flea market about 25 minutes away with no games. Both start at the start time. Decisions, decisions...

I got all this at the flea market for $55 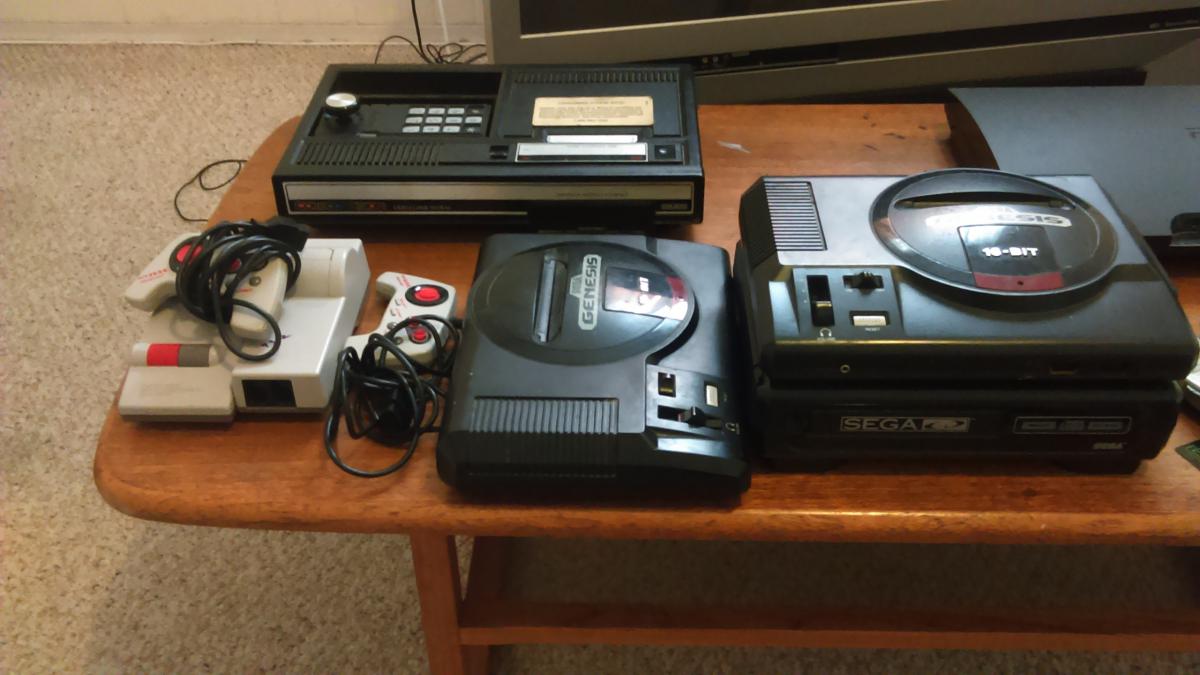 Nice find Needler! I've yet to see a gen 1 Sega CD in the wild. Still no yard sales for me yet, in the next couple weeks there should be enough for me start my season.

This season could be rough for me though. I've been doing storage auctions, and all the extra stuff I get I bring to an auction house. The time to bring stuff is Saturday mornings...

Any way, it's good to be back!

So I learned an important lesson this morning about getting greedy. I had a line on a definite video game cache, but decided to hit another place up first, thinking the first was relatively safe. I got to the sale with the video games about an hour after it started, only to find all the games gone. It was apparently a big box of PS2 stuff which still sucks, but isn't as bad as it would have been were it Nintendo.

Today I found this for $30 at the flea market. It's new never been used. 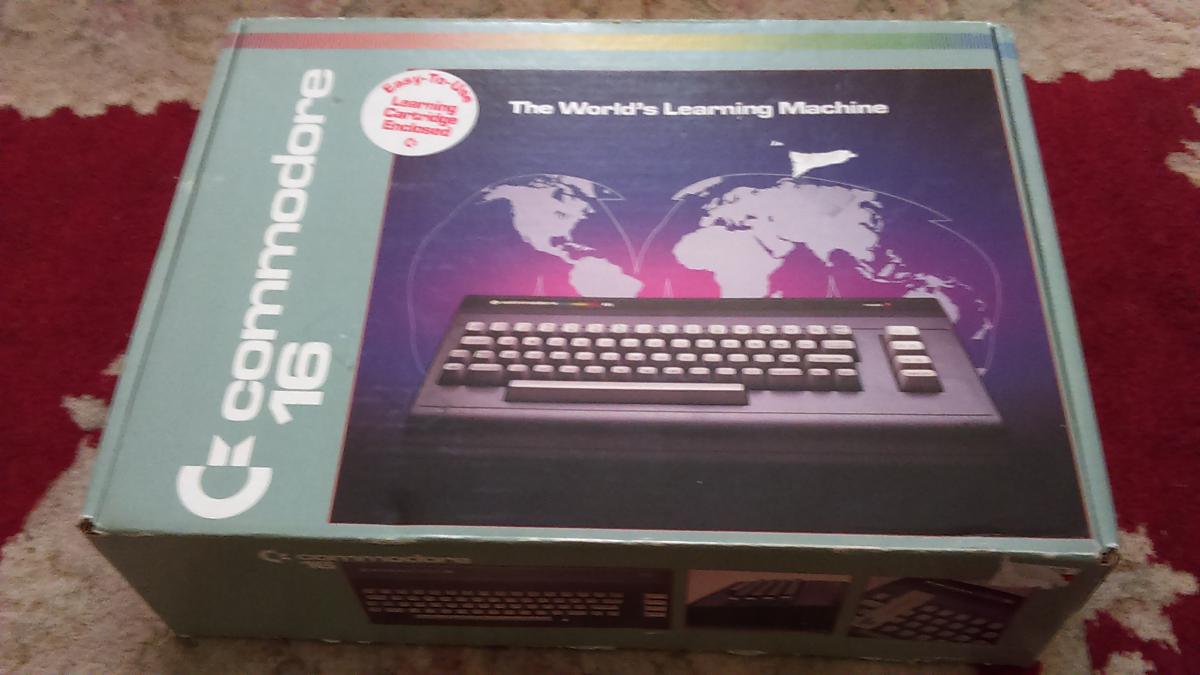 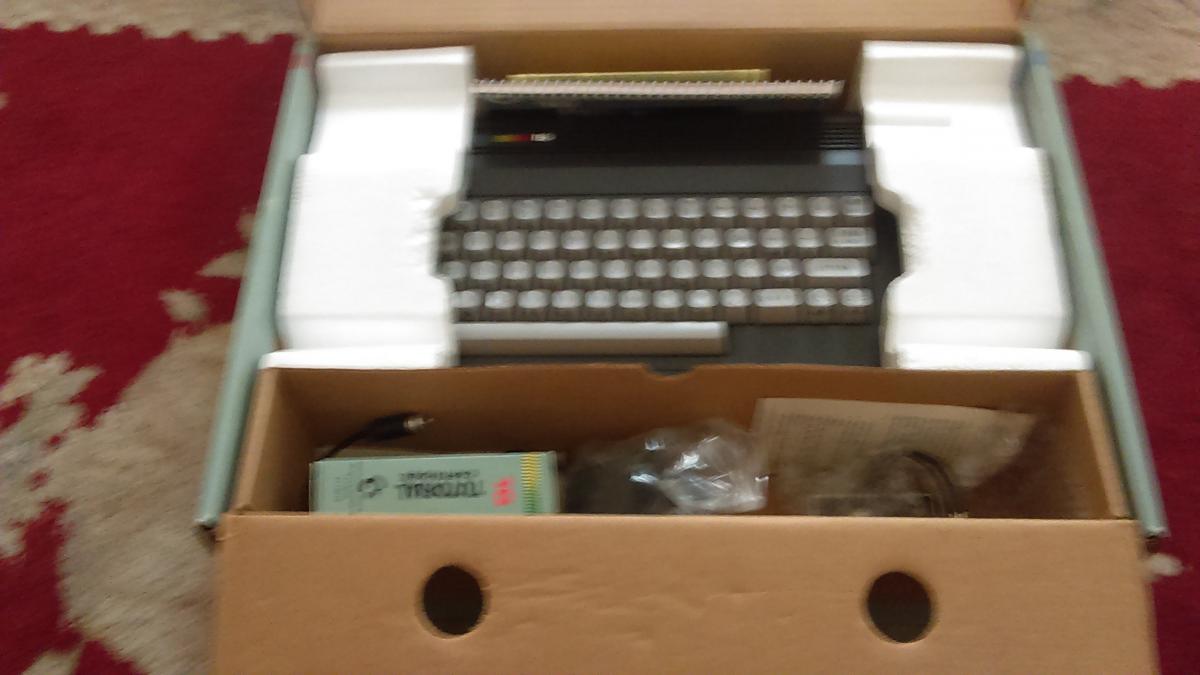 It wasn't a yardsale find, but I had to brag.   my older neighbor came up to me yesterday and asked if I wanted some FREE woodworking tools.

being a cheapass I said sure.       it ended up being three truck loads of stuff

other stuff I haven't even gone through it all yet

roughly figuring  I got almost 1000 dollars worth of stuff for  free.     That's the best yardsale

Yesterday and today were the first times I tried my hand at doing yard sales. Most people had crap clothes or broken old toys. Wasn't interested.

Luckily I found a yard sale from someone who buys storage units and sells the contents. She had a shit ton of Rock Band, Band Hero, DS games, etc. sealed but I only got Cooking Mama 4 since it was the only one of worth. $1/each. Struck out on video games today...

On Friday I got a GC-GBA link cable and a GBA multiplayer cable. $1 each. There was also a like-new Sudoku TV gaming system for $3, which I bought mostly in the hopes of flipping it.

Not quite enough sales to warrant me going out this weekend, it's getting close to starting up though, the weather was perfect for garage sales.

Man... the community sales I went to today were Wii-city.
I saw at least 15 different Wiis being sold. One lady was selling her system, Wii Fit Board and several shovelware accessories and games for $30. I told her to put it up on Craigslist for $50 and that if I didn't have a Wii already, I would've taken her up on that for sure. I did buy her one worthwhile game, Mario Kart Wii, for $3, though.

Anyway, my total haul was:

I also got a bag of like 25 loose Wii & Gamecube games for $10. I saw Smash Bros. Brawl, Pokemon Battle Revolution, Mario Kart and some other decent Wii games in there... so I offered him $10, knowing full well that the games could have been scratched to hell. Turns out most of them were in very, very rough shape. I tested them and most of them still played, but I didn't feel comfortable trading or selling them online, due to their condition... so I took a select bunch of them to GameStop with the PS2 system I got for $5 and managed to get $75 in trade.

The copy of Smash Bros game was in surprisingly good shape, so I kept that for trade or sale. I also kept a copy of  Kirby Air Ride for the GameCube, but it needs resurfacing before I do anything with it.

All that's left, other than that, is about 12 cheap/crappy Wii and GameCube games, that I'm going to sell in a bundle at my garage sale for like $5 or something.
I was worried after I saw that most of the games were very scratched up, but it turned out to be a really good buy, as when all things are said and done, I should get a $100+ value out of it.

GameStop was actually very trusting of me, when I brought in the bunch of the scratched games. I told them that I tested them all, but I couldn't get one to work. They took in all the games I said  worked for normal trade and took the one that was too scratched and charged me a refurbishing fee. I really like my local GameStop. Employees are all very nice.

First yard sale pickups of the year.  Friday morning, two sales.  $6 total.  WiiU game is new/sealed.  The CD's I'll give as gifts.  Not my style. This weekend turned out to be pretty bad for yard sales, as the temperature dipped back down to freezing and there were flurries all morning on Saturday. No video games to be found, but I did pick up a bunch of manga for my wife for $1 apiece along with Pokemon Black/White guide for myself for the same amount.

Past 2 weeks finds. I also found 2 DSi+Pokemon Diamond and Wario Woods (SNES), I can't find them ATM, lol. Each game was $5 but, I haggled the price for 2 for $8. I'm really hyped about the XBOX and PS2 games! 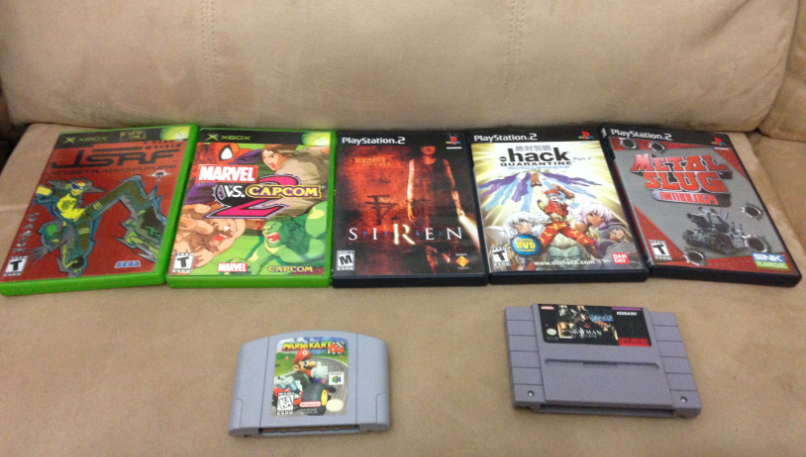 My first find of the season and I'm  happy.

$50 for all (not a screaming deal, but I didn't mind with both of those Battletoads games in the mix).

First yard sale pickups of the year.  Friday morning, two sales.  $6 total.  WiiU game is new/sealed.  The CD's I'll give as gifts.  Not my style.

Man, got a storage unit today for $20. First box had a few NES & SNES games. A couple other boxes had cables for every system imaginable, but the only systems to be found for a slim ps2 & a fat ps2. Also had a couple empty Wii U game cases. I was wondering when I'd first start seeing that stuff in units, but didn't expect it to be this soon.

Man, got a storage unit today for $20. First box had a few NES & SNES games. A couple other boxes had cables for every system imaginable, but the only systems to be found for a slim ps2 & a fat ps2. Also had a couple empty Wii U game cases. I was wondering when I'd first start seeing that stuff in units, but didn't expect it to be this soon.

Out of curiosity what do you do with the rest of the stuff in the storage unit? I'm always tempted to go check out an auction or two, but I my wife would absolutely murder me if I brought home an entire locker worth of stuff (I'm really only interested in the games, anyway.)

That's around what I usually pay. This auction was really close to home, didn't make it on Auctionzip or any of the other websites... and a few towns around me had auctions at the same time. If it was a normal auction day the prices on some of the rooms would have been much higher.

All that said, I finished getting through everything earlier... Ended up with about 100 NIB Barbies (none are worth too much on their own, but there is strength in numbers) and also ended up finding a black DS Lite console & a Zelda themed original 3DS console (but the top screen is cracked). I know it's not yard sale related, but hope you all don't mind hearing the finds anyway (the best of the games I found were: Legend of Zelda NES, Mike Tyson's Punch-Out, Wolfenstein 3D on SNES, & Mario 3; only empty cases for 3DS games).

My favorite thing about auctions is meeting other 'auction hunters' who aren't in to video games and are willing to sell me stuff. That... and all the riff-raff I run in to.

@Mike_TV : I have a 10x20 storage unit I work out of, and wish I had more space. If I'm in a town with a dump, I will go through the unit where I bought it and get rid of the trash as I go. If it's close to home, I bring everything to my own storage place and get through it there. I'd say 95% of what I got yesterday was either for the thrift shop or the dump... but that other 5% ended up being really good. If I had more space, there is a lot more I would keep to sell, and probably a lot more units I would buy lol.

Went to a storage auction a few years ago, they opened everything before the auction and set a few items in front that they thought would make it sell. I'm sure they kept anything of value. Needless to say, I didn't buy anything and I never went back to another one.

That just seems like something I would never want near my ear.

Very cool, dasme313. I live in the city so I think the market for storage auctions is already pretty strong, so I just try to keep tabs on various people I know who do clean outs and check in with them everyone so often. I know I'm paying a bit of premium buying from them, but it's better than retail.

My first moving sale of the year, and I scored a wii rock band 2 set(wireless drum set, cymbals, mic, wireless guitar, but no game), Guitar Hero 2 (PS2) game with the big box for the guitar but the lady says the guitar was missing, and a big bag of pokemon(some good cards), yugioh, and various other cards. All of it for only $10.

Still haven't bothered driving around yet for yard sales. It gets cold every freakin weekend so far this spring.